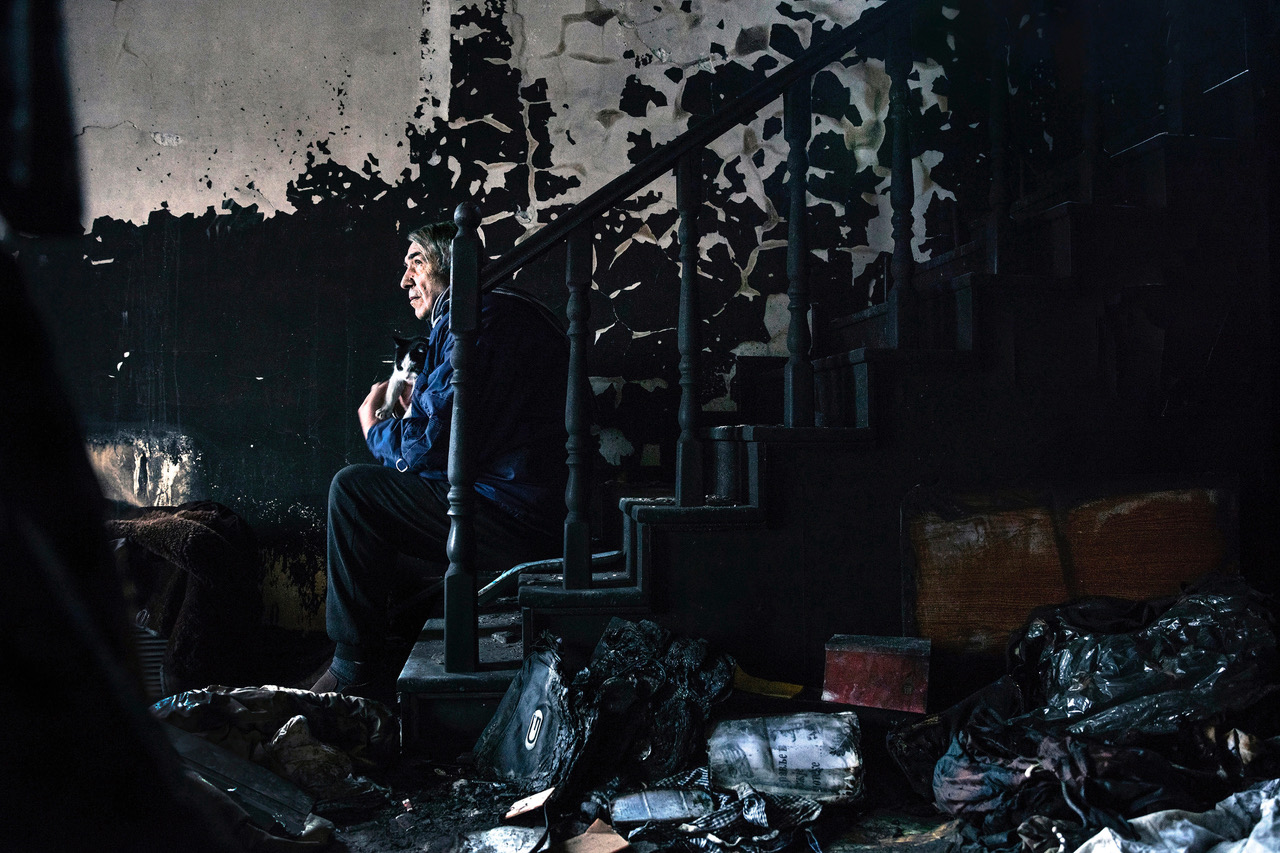 30/12/2018 Grocka, Serbia. Milan Jovanovic, an investigative journalist, sits on the staircase among the remains of his house which was set ablaze two weeks earlier. On the night of 12th December at 3:30 in the morning attacker threw a Molotov cocktail through the window of the house where Milan and his wife were sleeping. The house was completely burnt on the inside, while two of them managed to escape at the last moment through the back window. They've heard gunshots directed at the front door before leaving the house and gun shell was later found during the police investigation. The state of media freedom in Serbia is worrying, and it has a constant and clear decline since 2012. Significant pressure is on small local media outlets dealing with issues of corruption, embezzlement and other criminal activities of local state officials, while at the same time they are heavily dependet on the state financing. Criminal acts commited by local officials are a common practice in many small Serbian municipalities, and they represent a commonplace of Serbian contemporary life, but still remain unprosecuted and underreported. Milan Jovanovic was bravely reporting about these issues in the environment in which he lives , targeting specific individuals involved in these actions, like in the case of "suddenly acquired property" of the head of the local Grocka municipality, as well as alleging corruption in the construction of sewage systems, after which local authorities cut down his water supply. Photo by Marko Risovic / Kamerades.

After all hearings scheduled for November and December had to be cancelled due to the alleged health problems of defendants, the trial for the arson attack on the the house of journalist Milan Jovanović has seen the accused’s lawyers again attempt to obstruct proceedings, this time by requesting the expulsion of Judge Slavko Žugić, due to his alleged bias in proceedings.

According to the findings of Cenzolovka, the defense team’s request has been deemed unfounded and rejected, while the trial of Dragoljub Simonović, former president of the Belgrade municipality of Grocka, and others accused of firebombing Jovanovic’s house in December 2018 could resume on 19th January.

Had the request to disqualify the judge been adopted by the President of the Second Basic Court in Belgrade, the trial would have had to start from the beginning and the past two years of hearings, which included more cancelled than held hearings, would have been discarded, with the entire process of presenting evidence having to be repeated.