The “Evropljanin” magazine was established by Slavko Curuvija in 1998. It is still considered to be the highest quality magazine ever to be published in Serbia.

This is the chronology of events that marked the “Evropljanin” magazine’s destiny:

The 13th edition of “Evropljanin” was published, containing an open letter to the president of Serbia Slobodan Milosevic entitled “What’s next, Mr. Milosevic”, signed by Aleksandar Tijanic and Slavko Curuvija.

The Serbian Parliament, as a matter of urgency, passed the Public Information Law, which contained drastic fines for the media. The members of parliament from SPS, JUL and SRS announced that the law was passed for “security reasons”, and its implementation was to ensure a “stronger defence for the Federal Republic of Yugoslavia”.

The trial of the “Evropljanin” magazine (October 19 edition) began before the Municipality Magistrate. The request for the start of the prosecution proceedings against Slavko Curuvija, the founder of the magazine, Dragan Bujosevic, the Editor in Chief, DT PRESS Firm, and Ivan Tadic, the director of the edition, was submitted by Milorad Radevic, the president of the Patriotic Union of Belgrade. The misdemeanour charges said that several articles, illustrations and photos were published in the “Evropljanin” magazine dated October 19, 1998, which called for “the violent destruction of the constitutional order and the violation of the territorial integrity and independence of the Republic of Serbia and the Federal Republic of Yugoslavia”. The remarks given by the defence with regard to the groundlessness of the claim in relation to the new law were not adopted, because “Evropljanin” was printed and distributed before the law came into force.

At 11 PM, the trial that had lasted all day reached completion, but Judge Mirko Djordjevic announced that the he would deliver his verdict in writing.

In the early morning hours, the written verdict arrived from the Municipality Magistrate, according to which the founder, the editor, the director and the publisher were fined 2,400,000 dinars (at that time, 250,000 German Marks). The company and Curuvija were fined 800,000 dinars, and Bujosevic and Tadic 400,000 each. A 24 hour deadline was imposed for paying the fines while a warning was issued that seizure of property would follow. At 20.30h, the staff of “Borba”, representing themselves as executors of the Stari Grad Municipality, rushed into the building. A large number of people dressed as civilians, accompanied by the police, forced the journalists out of the editorial offices of the “Dnevni telegraf” and “Evropljanin”, and the inventory of the tables and equipment began. In the printing office, they insisted on seizing 100,000 copies of the “Dnevni telegraf”, the reason why the rotation of the printing did not start. The officers spent all night taking out the technical equipment and furniture.

At around 9 AM, the inventory from the premises of Firm DT PRESS Marketing was seized from Lole Ribara 35. The tables were estimated at 70 dinars, chairs at 50, and computers at 1,500 dinars. 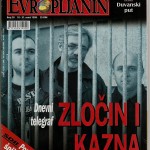 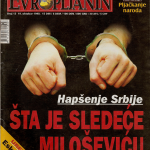 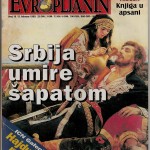 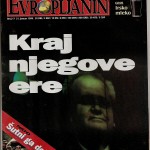 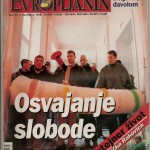 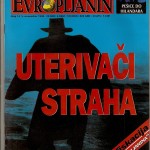