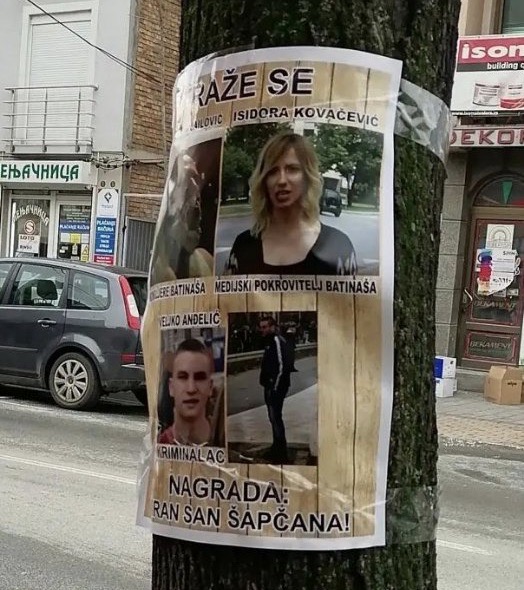 A month and a half after the streets of Šabac were plastered with wanted posters displaying the face of weekly Podrinska Editor-in-Chief Isidora Kovačević, police and the prosecution service still haven’t announced whether they’ve uncovered the identities of the authors and perpetrators.

The wanted posters appeared on 17th December last year, with Kovačević giving a statement to the prosecution three days later. However, as she says, since then “absolutely no one has called, neither from the prosecution nor the police”. Speaking to Cenzolovka, she said: “I don’t know what to expect or what the further procedure is. Nobody has explained that to me.”

She doubts that there will ever be an announcement confirming who ordered the printing of the wanted posters and who posted them around the city, although that information is “known by the whole of Šabac”.

Representatives of the Basic Public Prosecutor’s Office in Šabac told Cenzolovka that they act in accordance with files submitted to them by the police, but also on the basis of criminal reports, and that they “take action within the scope of their jurisdiction”.

Isidora Kovačević has never had a second’s doubt that the campaign to mount posters covering the city was connected to the environmental protests that took place in December and that she was included on that poster due to her having reported from those protests.

At the time the posters appeared, the targeting of the Podrinski editor-in-chief was condemned by the Coalition for Media Freedom, the Three Freedoms Platform and the Journalists’ Association of Serbia.